In this comprehensive guide to how to visit Lindos town, read how and why to visit this popular town and see the Acropolis, the medieval Castle of the Knights of St John, the best beaches, churches, and all about how to get there and best tours and accommodation.

How to Get to Lindos

Halfway along the east coast of Rhodes lies ancient Lindos (see the map below). Unlike Rhodes city, which lies at the island’s northernmost point facing modern-day Turkey, the ancient city of Lindos is built upon a piece of land that juts east into the Mediterranean.

Not to worry though, Lindos town is just under an hour’s drive from Rhodes Town and its international airport. Visitors can hire a car (or take a taxi for around 80-100 Euros) or travel via bus from the town of Rhodes, a longer but far cheaper journey.

The History of Lindos

According to Greek myth, Lindos was said to have been founded in the 10th Century BC by King Tlepolemus of the Dorians, a storied figure who also appears in Homer’s Iliad, commanding nine warships of the Greek fleet.

Lindos was one of the six Dorian colonies in the area (together known as the Dorian Hexapolis) and helped co-found the city of Rhodes in the 4th Century BC, which would later eclipse its parents and become the island’s capital.

Lindos was a Cultural Center

Despite its upstart child, Lindos remained relevant to the Hellenic world as the site of important religious buildings like the Temple of Athena Lindia.

Lindos’s people also brought it enduring fame. This includes Chares of Lindos, who built the Colossus of Rhodes, and Cleobulus of Lindos (one of Greece’s Seven Great Sages) who went on to rule the city.

Lindos was also a Coveted Stronghold

As time went on Lindos fell into the hands of the Romans and then the Byzantines before being captured by the Knights of Saint John in the early 14th Century.

The Knights turned the ancient acropolis of Lindos into a great fortress, which they held until the 16th Century when Lindos and the entire island of Rhodes were conquered by the Ottomans.

Lindos remained under Turkish rule until seized by the Italians in 1912 and it t was only in 1947 that Lindos finally became part of modern Greece.

Unsurprisingly, Lindos is filled with rich historical sights and those brimming with natural beauty. The imposing acropolis is a most impressive archaeological site, whether seen from the land or the sea. But it is just one of the amazing things you need to see when you visit Lindos.

Here are some of the many highlights that stand out to visitors and locals alike:

The Acropolis of Lindos

High above the village of Lindos on a headland that juts out into the Mediterranean is the Acropolis of Lindos. Easily defensible and with a commanding position over the surrounding country, this promontory has been a fortified religious and military site for thousands of years.

The Lindos Acropolis has a number of structures built on it (like the other great Acropoli of Greece such as Ancient Corinth and the Athens Acropolis). The buildings on many Acropoli were built over the main historical eras in Greece and that’s the case here with a mixture of ancient Greek, Byzantine, and medieval buildings as well as temples, vaults, and stoa from Hellenic and Roman times.

Here’s what you can expect to find:

Buildings and Structures on the Acropolis of Lindos Rhodes

The Temple of Athena Lindia

The area around the ancient acropolis has been used for religious worship since time immemorial. However, the first real temple to Athena Lindia (the local aspect of the famous goddess) was probably Tyrant-Sage Cleobulus in the 6th Century BC.

By the 4th Century BC, that temple had been burnt down and subsequently rebuilt as the Doric Temple of Athena Lindia, at which figures like Alexander the Great offered votive sacrifice.

Falling into disuse after the Christianisation of Greece in the 4th Century AD, the remains of the temple were rediscovered by a team of Danish archaeologists around the early 20th Century.

The archaeologists unearthed its iconic propylaea (monumental gateway) and Hellenistic stoa (monumental staircase and walkway). All of these ruins are still visible today. 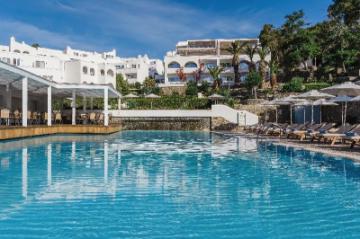 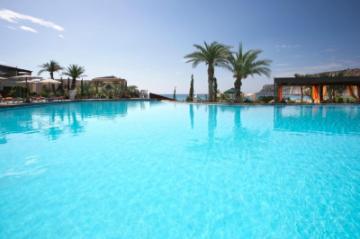 Castle of the Knights of St John

Long after Homer’s Iliad and the Roman Empire, the Knights of St John acquired the Island of Rhodes under very dubious circumstances.

Coming to Lindos they immediately saw the value in the crumbling fortifications of the town’s acropolis and set about turning it into a medieval fortress.

Much of the castle’s medieval walls and two of its towers survive today as does the castle’s entrance, with the Order’s coat of arms intact. 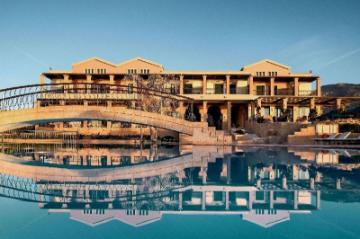 The Village of Lindos

Although the Acropolis of Lindos catches a lot of the limelight, the old town of Lindos is as ornate as any of its kind. With its iconic whitewashed walls and terracotta roofs, sleepy Lindos village is filled with historic churches and lively tavernas catering to all kinds of visitors.

The Theater of Lindos

Major sites include the Theatre of Lindos, carved into the foot of the Acropolis and pressed up against the lower town itself.

Built in the 4th Century BC, this ancient stadium could seat up to two thousand people and was often devoted to wide-ranging religious celebrations, especially those of the God Dionysus.

The Church of Panagia and Chapel of Saint George Pachymachiotis

With the rise of Christianity, new sites were built for new types of worship. In the early 14th Century, the Church of Panagia (Our Lady) was constructed. Standing noble with its high walls walk inside to see its exquisite courtyard, covered in iconic hohlaki pebble mosaic.

Make sure to also investigate the Chapel of Saint George Pachymachiotis, a more modest affair that was built a little later into the 14th Century, around the time the Knights of St John came to the island.

Lindos has its fair share of amazing Greek street foods, but if you’re keen on staying the night, why not stay on a rooftop terrace with views out over the Mediterranean? Once settled in, it’s only a short stroll down to the Courtyard Bar, with its spectacular views of the Acropolis.

Rhodes is an island in the Aegean Sea, and beyond its cultural and historical attractions is an undeniable coastal splendor.

Lindos contributes its fair share to this reputation with three great beaches within walking distance from the town center.

With public amenities and restaurants close by, the most popular beach in the town is Lindos Beach, also known as Main Beach or Megali Paralia. In high season, come in the early morning to get a sunbed!

The biggest beach in town, it is a crescent of fine white sand that curves along Lindos Bay in between two rocky headlands. It’s not just a lovely beach, it’s also amazing to be able to see the Acropolis above!

Just across the eastern headland lies Pallas Beach, a smaller and quieter sandy beach that’s popular with the locals. Its shallow waters make it great for kids, while the acropolis looming just above makes it a great place for quiet contemplation.

The beach is spectacular at twilight and there is a beer bar at the end.

Pictures just don’t do justice to the beauty of this incredible part of Rhodes and its dramatic natural landscape.

A little away from town towards the south, Saint Paul’s Beach lies on the aptly named Saint Paul’s Bay. Perhaps the quietest of all the beaches of Lindos, this isolated and rocky cove is great for intrepid snorkellers, intent on exploring the area’s marine life.

Lindos is a lovely village to explore. Most visitors head for the Acropolis and its monuments and ruins, and to the lovely beaches, including St. Paul’s Bay. It is a stunningly beautiful place.

How far is Lindos from Rhodes Old Town?

Lindos is 48 kilometers from Rhodes Old Town along the main road that follows the coastline.

What is Lindos Famous For?

Lindos is most famous for its Acropolis and the ancient monuments at its summit but also for its Byzantine and medieval history and ruins. Its stunning beaches and narrow village laneways are part of what makes up Lindos’s famous beauty as a Greek island holiday destination.

How much is a taxi from Rhodes to Lindos? Are taxis expensive in Rhodes?

How long is the bus journey from Rhodes Town to Lindos?

Yes. It is sandy, large, and faces a shallow bay with crystal clear water.

Is Lindos good for couples?

Lindos is a romantic holiday destination. Beaches, spectacular views, and sunsets, with many water activities as well as significant archaeological sites to discover. It has a large number of tavernas and bars and quality accommodation.

How do I get from Rhodes to Lindos?

There are three main ways of traveling between Rhodes and Lindos. The most convenient is to drive or take a taxi which takes just under one hour to travel the 48 kilometers. A bus network also covers this trip in 1 hour and 49 minutes and departs frequently throughout the day. A third possibility is to join a tour from Rhodes to Lindos by boat, this takes 2 hours and 45 minutes.

Which airport for Amalfi Coast?

Hi! I'm a cultural anthropologist & avid traveler. This is a site for curious travelers who want to be more than just tourists. I want to inspire you & help you plan & book your next trip by learning more about the cultures & histories of some of the world's most exciting destinations.

Read more about my story here

The 25 best hotels in Santorini with private pool

Everything you need to know about visiting the Acropolis

The Oracle of Delphi: a detailed guide for visitors