The ancient Khmer Empire spread over much of what is now Southeast Asia. United by ‘god kings’ such as Jayavarman II, enormous religious cities were built such as Angkor Wat in Cambodia and Phimai in Thailand.

Colonized by France in 1863, Cambodia became part of French Indo-China. It regained Independence in 1953.

The Vietnam War was a major destablilising force in Cambodia and led to the coming to power of the totalitarian regime of the Khmer Rouge, led by Pol Pot. He declared 1975 to be Year Zero and commenced genocide. He was ousted by the Vietnamese in 1979.

Cambodia has had a veneer of democracy since that time but is repressive and is essentially a one-party ruling state.

Theravada Buddhism is the primary religion, having survived the attempts of Pol Pot and the Khmer Rouge to annihilate all religion in Cambodia.

Khmer minority groups including upland people, have distinct cultures. As in the rest of Southeast Asia, distinctive traditional clothing, dance, music, architecture and sculpture have emerged.

The Khmer Kingdom’s ancient roots in Angkor can be seen in many of these cultural arts and traditions. 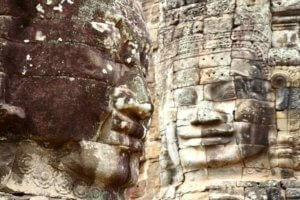