Nestled in the Cyclades Island within the historic Aegean Sea, Santorini is one of the most famous and is the most beautiful of the Greek islands. Island hopping around the Aegean Sea is easy with the Ferry Hopper booking site, while flying is a quick way to make the most of your precious holiday time. Read on to find everything you need to create your perfect Santorini holiday.

While a flight is great if you need to get there quickly, many visitors choose to get to Santorini just like Homer’s ancient heroes did: on the deck of a ship (or high-speed ferry as the case may be). There’s something incredible about arriving from the sea below the cliffs of Santorini!

The city of Athens has three major ports: Piraeus, Rafina, and Lavrio, but ferries to the island of Santorini generally only run from the first two at the moment. Here’s the best way to get to each port and some things you should bear in mind.

How to Get to the Port of Piraeus

Located to the south of Athens City Center, Piraeus isn’t just the biggest passenger port in Greece, it’s the biggest in Europe. Once its own distinct town, ancient Piraeus has long been linked to its larger neighbor and has been gradually swallowed by Athens’ slow sprawl southwards.

The quickest way to get to Piraeus is via taxi. If you’re leaving from Athens International Airport, trips will take up to forty minutes to an hour in the middle of the day but come at a hefty price of around 50 euros (flat-rate) and 70 euros after midnight.

The next quickest way is to take a direct train from Monastiraki metro station. Line One should take you straight to Piraeus and from there it’s only a ten to fifteen-minute walk to the terminal gates. Tickets cost about 10 Euros, although trips are free for children under six.

Finally, there’s the bus, which takes a little bit longer than the other options but is significantly cheaper and will take you directly to the terminal. Taking just over an hour and a half on average, the bus costs around 6 Euros and departs every 15-30 minutes twenty-four hours a day.

Remember to take the X96 bus from Athens airport, this stops at Gate E6 (where the Blue Star ferry bound for Santorini departs) just a stone’s throw from the ticket booths at Gate E7.

Mykonos to Santorini Ferries and Flights 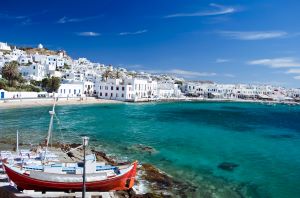 How to Get to the Port of Rafina

Sitting on the other side of the Attica Peninsula, Rafina has a much shorter history than its rival, Piraeus. It’s also being upstaged by nearby Lavrio, an ancient mining port set to be transformed by investment from tech company Microsoft. Rafina has the advantage though of good connections with other Greek islands like Mykonos, and it’s closer to Athens’ International Airport.

Unlike the costly journey to Piraeus on the other side of the city, a taxi from the airport to Rafina will take around twenty mins and cost up to 40 euros.

There is no direct rail line to the ferry terminal, but public KTEL buses run straight from the airport at the hour, depending on the season. They should take about forty minutes (if you’re lucky) to get to the ferry terminal and cost about three euros, with children traveling free.

While the traditional berth at Skala still sees big cruise ships dock, the smaller and newer Athinios is Santorini’s major ferry port. It’s the destination for all boats coming from Athens. Fifteen minutes from Fira (Thira), Athinios is an unassuming little village at the base of imposing volcanic cliffs on the island’s caldera side.

Though far from ritzy, a number of little snack shops are here to serve you while you’re waiting and there’s plenty of places to book taxis or rent cars for traveling throughout the island.

As the only port on the island, Athinios can be quite busy at peak seasons, so make sure you get in there early to pick up your tickets and avoid missing your ferry. 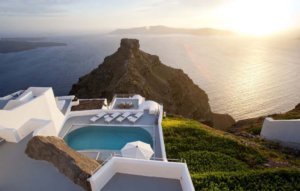 How to Get to Athinios Port

Buses to and from Athinios pretty much run from the capital at Fira and nowhere else, so if you’re counting on public transport, make your way to Fira bus station. One-way trips cost only a few euros. but the timetable changes according to the ferry schedule and is usually only printed out a few days in advance.

Fira is your connection to pretty much everywhere else on the island, from the black sands of Perissa beach to rugged and volcanic Kamari. Regular connecting buses will take you to all the key destinations.

Please note that while taxis are an option, there are precious few on Santorini, and there’s no guarantee you’ll be able to get one in peak periods. 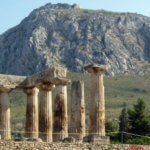 FerryHopper is also the simplest way to book multi-island trips so that you can Greek island hop easily. Popular destinations for ferry bookings include the islands of Rhodes, Tinos, Syros, Paros, Mykonos, Naxos, Isio, Milos, and Crete.

FerryHopper will also have all your ferry timetables for trips between Athens and Santorini, but here is some general advice you should keep in mind.

The peak season for ferry trips is, unsurprisingly, the summer and anywhere from six to nine ferries run between Athens and Santorini around June and July. Winter sees the number of ferries drop considerably, but there’s always at least one per day.

On a conventional ferry it usually takes around eight hours from departure to reach your destination, but high-speed catamarans will take you there in about five hours.

While this might seem like the superior option, they’re not for those of us prone to seasickness and it can be a wild and bumpy ride (especially if the weather is against you).

Despite what the timetable might say, ferries can and do get canceled due to wild weather, especially around August though this rough period generally clears by around September. Be prepared for cancellations depending upon the season you’re traveling in and the local conditions at the time.

Another thing to remember is that the Aegean ferry business can be as rough as the seas themselves, and ferry lines, ships, schedules, and gates change from year to year. For instance, the once staple Hellenic Seaways ferry Highspeed 6 no longer runs the Athens to Santorini route, and now operates over in Spain. 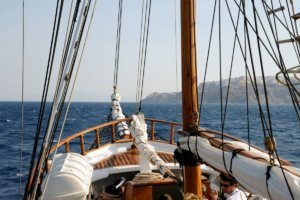 Departing from Gate E6 at the port of Piraeus, Blue Star generally runs slower car ferries that are a lot more comfortable and have a lot more seats than some of their speedier competitors.

This means it’s much easier to get a seat and tickets are quite a bit cheaper. This allows you room to upgrade to more comfortable airplane-style seats or (if you’re traveling overnight) a sleeper cabin on the Blue Star Patmos. 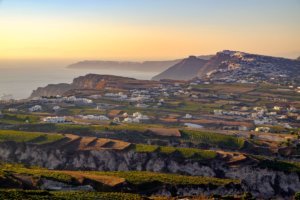 Seajet   (formerly Hellenic  Seajet Ferries) will get you to and from Athens to Santorini  the quickest, with its highspeed ferries SuperJet and WorldChampion Jet running the distance in just under five hours. For this reason,  Seajet ferries sell out quickly. However, if you’re not a fan of a hectic ride or just simply want to stretch your legs, Seajet may not be the line for you, as Seajet vessels generally don’t let passengers walk about on deckwhile they’re in transit.

Why You Must See Ancient Akrotiri on Santorini 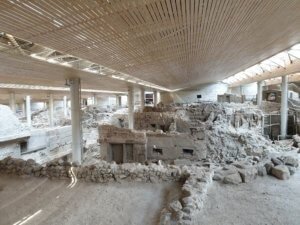 If you’re leaving from Rafina rather than Piraeus, the Golden Star-operated SuperExpress I is the most reliable bet for direct trips between Athens and Santorini in the summertime. Though not as quick as a SeaJet, the SuperExpress is a high-speed car jet and will get you to your destination a good two hours before larger and slower alternatives. 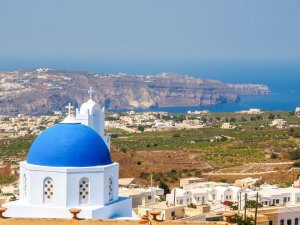 The insanely long lines for fery tickets in the morning (at Gate E7 at Piraeus Port) just make it obvious that you should book a ticket online. There is no extra cost at all and it’s one simple way of making the journey smoother. Keep in mind that you sometimes have to buy an individua one-way ticket for each part of your trip, as some Greek ferry lines generally don’t do multi-stop or return tickets.

Classes on ferries depend on the type of ship you’re traveling on and the class itself.

On a Blue Star ferry, economy class is also known as deck class and while it allows you both inside and outside seating, it comes with no reserved seat in itself. This can mean difficulties in rough weather or busy trips. A 4 Euro upgrade to an airplane-style seat is probably better in these times.

Economy on a high-speed Seajet sees you packed in like sardines, and an upgrade to business class offers a lot more room to move your legs and remain cool, calm, and collected.

Business-class on Blue Star on the other hand puts you in a much more comfortable lounge-type environment a little reminiscent of an airport foyer (but with waiters on call).

VIP tickets are far more expensive but are generally situated in small restaurant decks, restricted from general passengers, with their own bars and services.

Why You Should Visit Megalochori Santorini 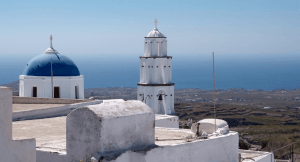 Flying from Athens to Santorini

But what if the ocean horrifies you? Or you simply don’t have the time to be lazing around on deck? If that’s the case there are direct flights from Athens to Santorini every day and at all times of the year, (sometimes up to twenty per day at peak periods).

Costs range from just $40 a flight to over $100 depending on the level of luxury you’re after.

Ryanair and EasyJet generally offer the cheapest flights but many other airlines fly this route, including Olympic Air, Aegean Airlines, Volotea, and Sky Express.  Keep in mind that these flights book out much quicker than ferry tickets, so more fore planning will be needed.

Flights are sometimes canceled due to the windy conditions of Santorini.

However, if you want to bypass Athens altogether, there are also direct flights to Santorini’s International Airport from a number of European cities (including Rome, London, Paris, and Berlin), depending on the season and the particular year.