The Cyclades islands in Greece include two of the world’s most popular destinations: Mykonos and Santorini. Island hopping around the Aegean Sea is easy with the Ferry Hopper booking site, while flying is a quick way to make the most of your precious holiday time. Read on to find everything you need to create your perfect Greek island holiday itinerary.

It’s about 118 kilometers from the party island of Mykonos to beautiful Santorini, and while a short plane trip can get you there in a flash, many tourists opt to take direct ferries to and from the islands.

Ferries are a great option when:

This page may contain compensated links. For more information read our disclaimer here.

The Port of Santorini

There’s only one major commercial port on Santorini, for while the old port at Skala still handles the big cruise liners, all commercial ferries now set out from Athinios Port.

Located fifteen minutes south of Fira (Thera), down some long and winding roads, this little village is nestled beneath volcanic cliffs on the island’s caldera side and is, fortunately, a great place to wait for your connection. 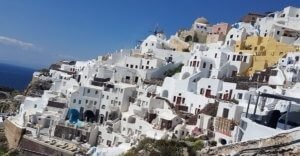 The Ports at Mykonos

Both ports have their own role in the grand scheme of things: the New Port handles most of the bigger ferries these days, while the more central Old Port is mostly for smaller craft including catamarans.

The seas between the two islands can be a bit choppy, especially in the summer months, but most crews offer anti-nausea medication for those of us prone to seasickness.

Another thing to remember in the summer is that the ports themselves (especially the New Port of Mykonos) can become very crowded, so make sure you give yourself plenty of time to spare.

Finally, remember that everything in Greece works to Greek time. Arrivals and departures won’t be on time and there will often be some organized chaos at ports and airports!

That’s why you’ll see that each time I mention a time, I’ll say “usually, ” or “about.” No matter what kind of arrangements you make, you need to remain calm in order to enjoy your holiday!

Due to the current COVID-19 epidemic, passengers on domestic ferries within Greece will have to complete and present a questionnaire upon departure.

There are typically around three or four crossings between Mykonos and Santorini every day. Each trip takes about two or three hours depending on the make of the ferry and the weather conditions.

The earliest ferries usually head out at 9.30 am while the latest leave at around 2 or 3.00 pm in the afternoon although this can sometimes stretch to as late as 5.00pm.

For up-to-date ferry timetables that take into account everything from weather warnings and Greece’s frequent transit strikes, go online to sites like FerryHopper.

Trips between the islands can cost anywhere between 40 to 80 Euros and are conducted by a number of different ferry companies.

Seajet ferries tend to be quicker than their rivals but are generally more expensive, with ticket prices hovering between about 65 and 70 euros, whereas you can get tickets on the Minoan and Golden Star lines for just under 60 euros.

A wide range of companies ply the seas between Mykonos and Santorini and deciding which runs the best ferries can be difficult.

The perfect fit tends to depend on the type of traveler involved and the particular trip they’re looking for. Read on for a brief description of the ferry companies and what they offer to customers.

Please note that while ferry giant and perennial favorite Blue Star Ferries can take you to either Santorini or Mykonos, they are not currently conducting direct trips between the two islands.

Founded by two brothers from Andros back in 2011, Golden Star Ferries is relatively new to these waters. It operates two larger ships, the Superferry I and Superferry II.

The wave-piercing catamaran and car ferry Superexpress I is the only craft currently running between Mykonos and Santorini. This is of course subject to seasonal change.

Operating in both Italy and the Greek islands since the 1970s, Minoan Lines operates the high-speed catamaran Santorini Palace, which makes frequent direct trips between Mykonos and Santorini.

Quick, light, and at times a little hairy, the Santorini Palace was previously owned by Hellenic Seaways, which no longer operates the Santorini–Mykonos route. Then known as Highspeed 7, it ran alongside Hellenic’s well-known FlyingCat 4, before a tragic bridge fire, comprehensive refit, resale, and rechristening.

Seajet dominates the route in between Mykonos and Santorini even in the off-season. Seajet was previously named Hellenic Seajet Ferries. Seajet runs a number of ships in between the two islands, including WorldChampion Jet, SeaJet 2, and PowerJet.

PowerJet often runs two trips per day. WorldChampion Jet tends to get between its stops the quickest, taking you from Mykonos to Santorini in just under two hours.

Please note that like other faster ships, SeaJet vessels generally don’t allow passengers to walk about on deck while in transit.

Flying around the Aegean Sea is a great option when:

If you’re not a fan of the ocean, don’t worry: both Santorini and Mykonos have working airports. They’re not particularly comfortable or modern, but they are much faster.

Flight time between Santorini and Mykonos is just 35 minutes. Flight schedules can be irregular.

While some years see multiple direct flights a week in between Santorini Airport and Mykonos Airport, other years see far less and some none at all.

Should you be unable to find a direct flight between the two islands, it is still possible to get between Santorini and Mykonos via Athens, though this is naturally more expensive and can take even longer than the ferry.

According to the latest information, at least five airlines are currently running direct flights from Mykonos and Santorini:

PIN Mykonos to Santorini Ferries and Flights FOR LATER 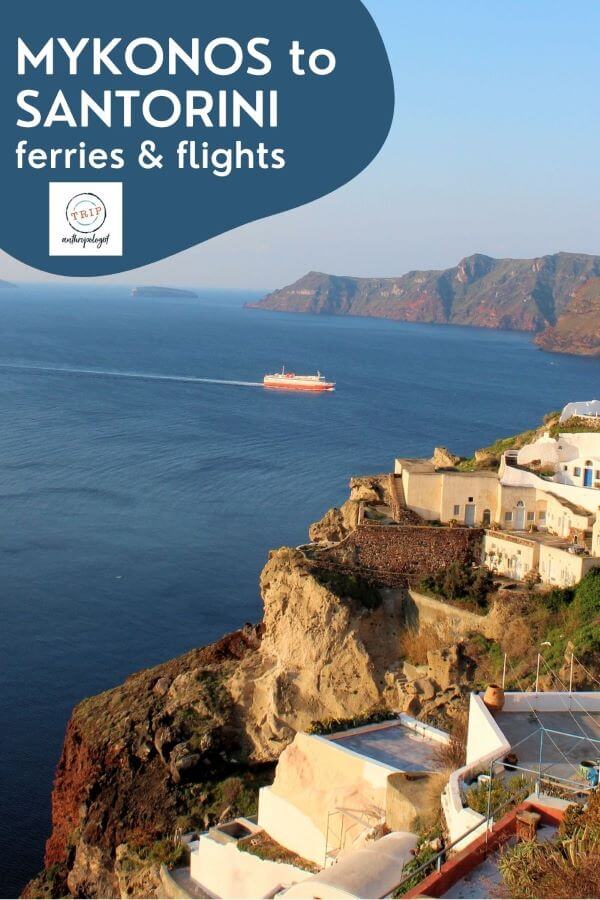