Oracle of Delphi: Why and How to Visit

The Oracle of Delphi was one of the most important figures in the ancient world. The Temple and Sanctuary of Apollo at Delphi is a large archaeological site on the slopes of Mount Parnassus in central Greece, visited by millions each year. Read how and what to visit at this significant site, why the Oracle of Delphi was so powerful, and why her prophecies continue to intrigue us.

For ancient Greeks, Delphi was the center of the universe. It was a religious sanctuary dedicated to the god Apollo, a meeting place of games and festivities for the Greek world, and the home of the most famous Oracle, or seer, of the ancient world.

In Greek mythology, Zeus sent two eagles to find the center of the universe and they alighted at Delphi. We know it was the center of the Greek world because of an Omphalos (or navel of Gaea) that marks the spot.

Delphi was not always called Delphi. It was once known as Pythia and the oracle was known as the Pythia priestess.

Delphi is located on the slopes of Mount Parnassus in central Greece. It is one of the greatest remaining sites of the ancient Greek world. Homer recounts the myth of Apollo coming to Delphi as a dolphin.

But before the myth of Apollo had taken hold, it was the oracle of Pythia that was consulted about all of the most important decisions facing Greek leaders.

A shrine to Pythia existed for several centuries but by the 7th century BCE, this prehistoric oracle became known as the oracle of Delphi who resided at the Sanctuary of Apollo.

Delphi became a site for the congregation of people from all over Greece with celebrations throughout the year including the Pythian Games.

The Oracle of Delphi

The Sanctuary of Apollo that grew at Pythia was founded on the legend that Apollo had slain a python or serpent  (pythus) whose body fell into a great fissure where it rotted and released vapors.

There are several variations on the general myth that the Oracle of Delphi fell into trances whenever she came into contact with the sweet smell of the fumes rising from the fissure into a cave.

The gases have been assumed to be methane, ethane, and/or ethylene. Their strength was amplified by the low ceiling and enclosed nature of the cave where the Oracle would hear the voice of Apollo.

French archaeologists have excavated the site but whilst space was found underneath the Temple, no fissure was found during the excavations which could explain the escape of gases from within the earth into the Oracle’s cave.

The Oracle was the high priestess of Delphi and other priests and priestesses conducted elaborate rituals for the Greeks (and from important people right across the Ancient World) before they were sufficiently purified to ask their questions to the Oracle.

In the 1980s archaeologists did find a crossing of fault lines which, due to the earthquakes in the area, could have caused gases to be emitted into a cave.

However, the Oracle of Delphi issued prophecies for 1000 years and became an essential part of coming to a decision about the most important matters in Greece during that time.

The Oracle was a woman over 50, generally from Delphi, who sat in the cave year-round except for the three winter months.

On the seventh day of each of these nine months, she sat on a tripod holding a laurel wreath and a bowl of Castalian spring water and answered questions put to her.

It is suggested that she answered in garbled and nonsensical sentences that were translated by the priests and priestesses.

It was important that the Oracle never gave entirely straight answers. Like most religious speech, there needed to be room for ambiguity.

This way of framing answers meant that any bad consequences flowing from her words would not be seen as wrong advice, merely misinterpreted advice!

It was also important that the Oracle didn’t cause the ruin of Greek society. The Oracle was asked, for example, if an Emperor or City State should go to war.

The Oracle would tell of the ultimate consequences of such an action (for example, there would be great prizes for the winner and terrible suffering for the vanquished), but would not actually say which side would win the war.

As a result of the Oracle’s direct channel of communication with the god Apollo, the religious sanctuary and its shrine grew into a powerful and wealthy city.

It remained that way until its destruction along with all other religious sanctuaries on the order of the Byzantine Emperor Theodosius in 393 or 394 ADE.

The Oracle of Delphi made a series of prophecies that changed the course of empires, kings, nations, and cities. The Colossus of Rhodes was never rebuilt because of the words of the Oracle.

She had told the Rhodians that it must remain in the sea and so it remained, after falling down during an earthquake, for 800 years.

The fate of the King of Lydia is perhaps worse. His name was Croesus and he wanted to invade Persia. He consulted the Oracle who said, “If you cross a river, a great empire will be destroyed.”  Croesus guessed wrongly, and it was his great empire that was destroyed by the Persians. The Oracle hadn’t lied, but the prophecies could always be interpreted in different ways!

Now that you know all about the Oracle of Delphi, read on to learn everything you need to know about visiting Delphi.

What to See at Ancient Delphi

This beautiful temple is made from marble-coated limestone and so it has decayed. It was a Doric temple six by 15 columns and stood upon the foundations of several other earlier temples.

There were figures of the god Apollo and also Dionysos as well as Persian and Gallic shields taken from vanquished armies that adorned the Temple.

But like the rest of Ancient Greece, this sanctuary, was destroyed on the orders of Emperor Theodosius I. It was then further razed by Christians.

The other large structure on the site is the Ancient Theater of Delphi that nestles in the upper slope of Mount Parnassus.

There is a 7-meter circular orchestra pit and it was the site of musical and oral contests that were held during the Pythian Games.

Athenians came to the Temple of Apollo and to visit the Oracle bearing expensive gifts. They built a treasury along the Sacred Way so that all those visiting the Temple would pass the marble building and know of the wealth of the Athenians.

The metopes that line the building are reproductions, but you can see the real ones, that depict the mythical king of Athens, Theseus, in the Delphi Archaeological Museum.

You will come across other Treasuries at Delphi but the Treasury of the Athenians was built to show proclaim their victory at the Battle of Marathon.

It contains extravagant votive offerings to show the world the prosperity and military prowess of Athens. The statues of Kleobis and Biton you can see in the Museum were found in the Treasury.

Stoa of the Athenians

Like the Athenian Treasury, the Athenians wanted to celebrate their victories in the Persian Wars through storing treasures and war loot in Delphi because it was a site of such importance to Greece.

The Stoa contains the spoils of the victories the Athenians had at sea against the Persians. Left standing is some of the eight Ionic columns of the Stoa.

It is located in the center of the archaeological zone, next to the Polygonal wall.

The Pythian Games athletics events took place at the stadium which is well preserved. 6500 people could watch the games from the stone benches high above the Sanctuary of Apollo.

It’s still possible to see the holes for the pegs and the flagstones that marked the start and finish lines.

The Tholos (or circular temple) is part of the spectacular Sanctuary of Athena Pronaia, half a mile from the Delphi archaeological site.

Three of the 20 Doric columns have been restored making it one of the most impressive structures still standing from the ancient Greek world.

In addition to the 20 Doric columns forming the circular exterior of the temple, the Tholos once had 10 Corinthian columns inside the temple. It is a photogenic and powerful site and dates from 380-360 BCE.

Try and squeeze in time – it takes a long time to get to Delphi – it would be a shame to come so far and not see this impressive monument!

The Delphi Archaeological Museum is one of the most important and most visited museums in Greece.

The museum contains the Sphinx of Naxos (above), a Delphi charioteer statue, and the earliest recorded melody! There are many other treasures that were found at Delphi housed in the museum. Make sure you see it before you head off to see the Tholos!

Where to Stay in Delphi 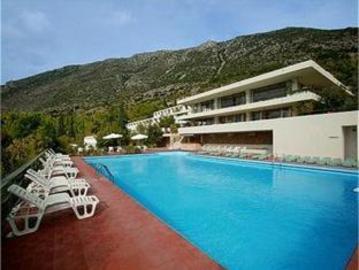 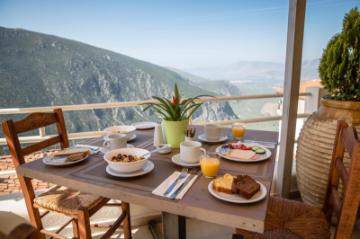 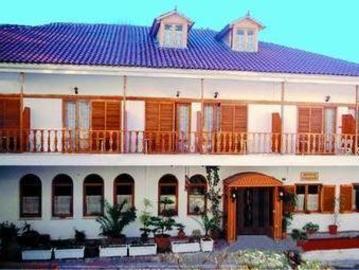