The city of Sopron is located in western Hungary on an isthmus of land that pokes into Austria, near Lake Fertö. Vienna to Sopron is only 75 kilometers. Sopron is next to the Lake Ferto UNESCO World Heritage site. It is a charming and historic medieval village with quirky theatre groups, Hungarian dumplings, goulash, baroque squares, fascinating medieval houses, renaissance architecture, Roman ruins, and great Hungary Sopron wine. Sopron is surrounded by forests and wineries and holds festivals and markets throughout the year.

Sopron is one of those magical hidden places in Europe. Its history includes its origins as part of the Roman Empire when it was known as the walled city of Scarbantia.

Scarbantia is still here – its Forum building and ancient walls have been excavated and are right next to the old town main square.

In the 16th century, the Ottoman Empire occupied most of Hungary, but Ottoman Turks who ravaged Scarbantia in 1529 didn’t occupy the town.

During the 9th–11th centuries, the Hungarians came to Scarbantia,  built a castle, and named the town Suprun.

It was also during this time that many Croatians settled in the area to tend the abandoned farms. The Croatian language is one of the recognized languages of the region including Hungarian and German.

During the early part of the 20th century, this part of Hungary was settled by Germans as part of the Austro-Hungarian Empire and Sopron became known as Odenburg in German.

It was during the aftermath of WWI when the Austro-Hungarian Empire was broken up that the German-controlled areas of northwestern Hungary were given to Austria.

The local people didn’t welcome this and civil unrest was rife. Because of it, a plebiscite was held in 1921 and the eight surrounding villages and Sopron voted to remain Hungarian. This date became an annual holiday in the region.

The Second World War saw Sopron suffer bombings, invasions, and eventual capture by the Soviets in 1945.

During this time under Soviet rule, the socialist government attempted to turn Sopron into an industrial city. Sopron did manage to maintain its medieval town center and many of its landmarks.

In 1989 Sopron was a catalyst for the mass flight of East German citizens escaping to the west during the Pan-European Picnic. This was a protest held on the borders of Hungary and Austria.

The lifting of the Iron Curtain created a moment when hundreds of citizens could escape from GDR. This successful crossing paved the way for the fall of the infamous Berlin Wall in November of 1989.

Today, Sopron, as a member of the European Union has turned its economy around and become a bilingual city with both Hungarian and German as the official languages.

Győr is the county seat and the other main towns around Sopron is Mosonmagyaróvár and Kapuvár.

The population of Sopron is around 63,000 citizens with 10% of the Sopron population being Croatian which is why you will also see Croatian signs around the area (and why there are some great Croatian pubs here)!

How to get to Sopron

Is Sopron in Hungary or Austria?

Sopron sits near the Austrian border and Vienna is only 75 km away. It is one of a number of charming historic towns in Northwest Hungary. Hungary’s capital, Budapest, is only 200 kilometers to the east. Visitors also come from Slovakia as well as international destinations.

One of the reasons for Sopron’s popularity is that it has become known as the “dental capital of the world” and offers first-class dental treatment that is affordable.

Sopron is within easy reach of Vienna by car and you can take the A2 from Vienna to the A3 and then onto the Sopron exit directly to the city.

From Vienna, trains leave for Sopron every hour. The journey will take around 1 hour and 20 minutes and Sopron is the last stop on the line.

Sopron can also be reached from the nearest international airports, which are Vienna and Bratislava. There are direct trains from both cities to Sopron although you must take the train from the airport to the central train stations in both cities.

Bratislava is only a one-hour drive (you can quickly get an international driver’s permit here), or 2 hrs and 48 minutes by train, connecting through Győr.

Sopron Hungary: Things to Do

I can think of so many reasons to visit Sopron and so many things to do in Sopron, including exploring the city center: its baroque Main Square with its cobbled streets, fascinating medieval houses, renaissance architecture, and old Roman archaeological site in the middle of town.

Then there’s the lovely Croatian pubs and Hungarian cafes and restaurants, the best local wines from the vineyards in the hills around Sopron, and even inexpensive dental work – what else do you need?

Did I mention the centuries-old monasteries converted into ridiculously cheap accommodation around Sopron?

What to See in Sopron

On the Northern side of Old Town,  Sopron is the main square (Főtér), which is surrounded by beautiful and elegant architecture.

The center of the square’s focus is the Holy Trinity Column which is a striking baroque monument erected to commemorate the end of the Black Death. Decorated with figures of patrons and saints the monument was a tribute of gratitude to God for ending the plague.

The square itself encompasses the City Hall (Eggenberg House), Storno-ház, and Fabricius-ház. At Christmas time, it is also the site of the Christmas market.

The Storno-haz (Storno House) is a baroque building that dates back to the 15th century and is now a museum that holds the treasures of Ferenc Storno and his family.

The rooms are decorated with stunning antiques including furniture, paintings, arms, weapons, and china and glass treasures collected by the family over the centuries.

Fabricius-ház means “Two Moors house” and Fabricius-ház is another museum that centers on the life of Storno citizens.

This 18th-century Baroque house contains excavated treasures from the Roman ruins and items used in everyday Storno life from centuries past.

The Church of the Assumption in the main square is nicknamed the Goat Church. It got its name because local stories say a goat herder uncovered a treasure on the site and you will see on the Holy Trinity Column a goat being hugged by an angel.

A gothic church the interior is mainly Baroque with a stunning red marble pulpit. The church is decorated with fading frescos and animal stone carvings representing human’s deadly sins.

The main landmark in Sopron and the de facto symbol of the city is the Tűztorony or Fire Tower that stands 58 meters high. Watchmen used to stand on the balcony to warn the people of encroaching fires and potential enemies.

The watchmen were also known for their musical prowess and were often a feature of weddings and celebrations taking place in the center of town. The tower itself stands on Roman foundations and consists of several architectural styles including a baroque crest placed on top in 1676.

Scarbantia’s Forum is next to the main square and has been excavated deep below the lines of old multi-storied Sopron houses all around it.

At one time Scarbantia guarded the Roman road north to Italy and was designated by the Romans as a municipium. It was a city with a Capitolium, amphitheater, waterworks, and the Forum that you can see today.

It’s also possible to see some of the remains of the oval-shaped city walls that were 3 meters thick and 8 meters high and had mighty gates and fortified towers between their lengths.

Bezerédj Palace is a fine example of Roccoco architecture. The Palace was built in 1710 on top of medieval foundations. The Bezerédj family bought the palace from the Festetics family in 1833.

It’s open daily from 9 am to 2 pm and you should plan to spend about 30 minutes at the palace.

It might seem strange to put a university campus in a travel guide, but the University is why I first came to Sopron. The University of Sopron ranking is not at top of Hungarian universities but it is a historic university, beginning in 1735.

The campus is set in an old forest and sustainability and innovative use of wood in manufacturing means it is important for the city and the country. Walking its paths and seeing its eco-center is a lovely way to spend an hour or two on a sunny Sopron afternoon.

Wine and Food in Sopron

During the Roman occupation farmers in Sopron began cultivating wine grapes and producing both white and red wines.

According to stories from the winemakers, Napoleon’s soldiers who invaded Sorpon paid for their wine with a blue frank note, which the name of the most famous Hungarian wine Kékfrankos came from.

Although famous, for its reds, Sopron does grow white grapes and in the communist era, both wines were mass-produced. The area is becoming known for quality wines that match Austrian varieties but they are much less expensive.

The farmers who grow the grapes were masters at using all the available areas for growing crops and they began to grow beans among the vines.

Soproni is made at the Soprony Brewery in Sopron, Hungary. Soproni is a popular Hungarian beer brand. The Brewery makes European lager, Pale Ale, and a Fruit and Field Beer.

This has led to Sopron’s traditional cuisine incorporating many bean dishes from salads to main courses and even a sweet bean strudel.

Spiced cabbage is one of the Hungarian dishes that is commonly served in the Sopron area and usually meals are meat-heavy with substantial goulashes and stews.

Sopron restaurants also serve Croatian favorites many of which include cabbage but also veal dishes and pasta surprisingly.

What is the best Sopron restaurant?

The best restaurant in Sopron is ERHARDT, serving European and Hungarian food. Sit out on the terrace of this beautiful building.

Sopron Hotels should be chosen carefully. Some are in need of a good renovation but some are impossibly romantic and with excellent restaurants and cellars. The best are below but check out the list as it contains some gems as well. 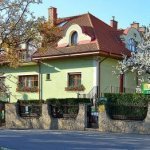 A little outside the main center Vadászkürt Panzió is an affordable combined guesthouse and restaurant. The restaurant and cellar are fabulous. 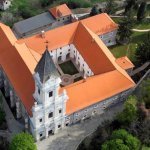 Sopron Monastery Hotel – a former monastery, 3.5 km from the center of Sopron. Newly renovated rooms, stylishly furnished, wooden floors & modern bathrooms. One of the most magical places I have ever stayed.

Pannonia Hotel is situated in the heart of Sopron.  The hotel is the oldest in Sopron and was built in 1893.

Hotel Palatinus is another lovely hotel right in the historical center close to the Fire Tower.