The Château de Chenonceau is the most important and most visited of the French castles, second only to the Palace of Versailles. The château is located 5 km from the village of Chenonceau, 40 km from Tours, and 214 km from Paris in the Loire Valley. The castle has a rich history, unique architectural details, and is a popular day trip from Paris.

A fairytale castle, its architectural uniqueness lies in the way that the château spans the River Cher in the Loire Valley. A separate tower, the Marques Tower, sits just to the right of the main building.

This visually stunning castle is surrounded by exquisite formal gardens and forests – the hunting grounds of the French Kings.

But it is the French Queens and other powerful women who created cared for and curated this architectural feast as it grew and changed hands over the centuries. Read on to discover how six women fought for their right to own, change, and live in this castle over the river.

How to Get to the Chateau de Chenonceau

It is easy to visit Chenonceau chateau as a day trip from Paris and even easier from Tours. Check out the best day trips below.

However, public transport is not readily available and neither are taxis if you are coming from surrounding towns and villages. I have waited for buses that never came and taxis that were ‘indisposed.’

Hiring a car is really the best way to see the castles of the Loire valley – car rentals are available in the center of towns and at regional railway stations and unlike Paris, parking is not difficult.

Why was the Château de Chenonceau built?

As you’ll see below, Castle Chenonceau was built as a home for a wealthy Frenchman and his wife. An older castle was demolished to make way for the new château.

From the 1500s to the 1800s the women who have called the Château de Chenonceau home were a strong and influential group. Given to a King’s Mistress, and eventually ending up lost in bankruptcy, women are an integral part of the château’s history.

Châteaux de Chenonceau pronunciation/spelling: Prior to the French Revolution “Châteaux” was spelled with an “x” at the end of the word but during the Revolution, the “x” was dropped to indicate it was not a royal palace.

The first château built beside the River Cher and was owned by Jean Marques when it was set on fire in 1412 as a punishment for sedition.  In the 1430s, Jean Marques managed to rebuild both the château and its fortified mill on the same site.

When his heir sold the château in the 1500s to pay his debts, Thomas Bohier and his wife Katherine Briçonnet bought it.

When Thomas was away at war it was Katherine who designed the Renaissance-style château with its turreted pavilion, tower, and monumental entrance. It was also Katherine who had the first straight staircase in France built at the château.

The unpaid debts of Bohier’s son gave King Francis I an excuse to claim the château for the French Crown in 1547.

The château’s history really begins in the 16th century when Diane de Poitiers, the King’s Mistress, was given the castle as a gift by King Henry II.

Although 20 years his senior the love affair between them carried on even through his marriage to Catherine de Medici. As his wife, Catherine was extremely jealous of Diane and as Queen of France, she was furious when Henri gave Diane the Crown Jewels and lavish gifts such as the château which Catherine had hoped to make her palace.

Diane adored Chenonceau and spent a great deal of time and money into turning it into a palace to rival Versailles. Her bedroom “The Chamber des Reines” is dominated by a magnificent bed and a fireplace decorated with royal symbols made of pure gold.

In 1556 she had a five arch bridge built over the Cher river by Philibert de l’Orme, a famous French designer, who wanted to link the chateau and the long gallery to the gardens.

The Garden of Diane included a floating parterre, which you can still see today. Designed in the French style, Diane’s garden is a French formal garden covering nearly 3 acres. In the center of the garden is an ornamental fountain surrounded by hundreds of roses.

After Henri II died his widow, Catherine de Medici, removed Diane from Chenonceau forcing her to exchange Chenonceau for the Chaumont-sur-Loire.

Descended from the powerful Italian de Medici family, Catherine had 10 children with Henri and was Regent of France while her grandson Charles IX came of age.

While at Chenonceau, Catherine sought to erase Diane’s influence. Catherine had the gallery above the bridge built and the stables known as the Bâtiment-des-Dômes. The Gallery was transformed into a two-story Italian style ballroom, which took 8 years to finish.

The floors were laid with enameled tiles and each end of the gallery features stunning Renaissance chimneys. The Gallery, lit by eighteen windows leads to the drawing rooms and bedrooms of the King.

The château became her favorite residence, and it was there that her son, Francis II, and Mary, Queen of Scots were married in 1560. The celebrations that marked his ascension to the throne included the first fireworks display in France.

Louise de Lorraine-Vaudémont was the wife of King Henry III (Catherine’s son) and was said to be a beautiful and gentle woman completely in love with her husband. Henri III was assassinated in 1589 and Louise chose to move to the château. She had inherited the château upon Catherine’s death.

At the château, Louise wore the white of mourning and became known as the White Queen. In addition to wearing mourning clothes, she also had “black tapestries” installed in her bedroom. You can visit her bedroom, which is covered in black velvet and decorated with painted crowns of white thorns and cross-stitched with patterns of skulls and crossbones.

Louise mourned her husband for the rest of her life and on her death in 1601 all her belongings were sold to pay her debts. After her death, Chenonceau was never again the home of any Royalty.

Louise Dupin was the next woman to control the château. It was purchased by her husband, a wealthy squire named Claude Dupin, from the Duke of Bourbon.

Louise was a great supporter of the French Enlightenment in the 18th century and she turned the castle into a literary salon entertaining philosophers such as Rousseau and Voltaire along with writers and poets such as Montesquieu and Fontenelle, and scientists such as Buffon. Louise created a theatre at the southern end of the gallery where she held plays and comedies.

Louise was an early feminist who fought for women to obtain an education and public employment and even wrote a book entitled On the equality of men and women.

Louise Dupin saved the château from the intended destruction of the revolutionaries and removed the “x” on the château’s title. Louise died in 1799 at the age of 93 and her grave is on the left bank of the Cher in the forest.

Marguerite Pelouze and her husband bought the château from the Bourbons, spending 10 years restoring the castle to its 16th-century opulence. This meant getting rid of many of the changes wrought by Catherine de Medici.

After the death of her husband, Marguerite started her renovations on the château with the architect Rouget. Marguerite wanted to return the Castle to its appearance in the 16th century and many of Catherine de Medici’s alterations were lost. The caryatids, which Catherine had added to the façade of the castle, were removed to the park and now sit beside the maze.

By 1888, she  was facing bankruptcy and sold the château  to a Cuban millionaire , José-Emilio Terry who in turn sold it to Francisco Terry in 1896.

In 1913, Henri Menier purchased the Château. A prominent family who made their fortune from producing chocolates, the Menier family continued to restore and maintain the castle under the supervision of Bernard Voisin. It was returned to a semblance of its former glory, even though it was converted into a hospital during World War I for wounded soldiers.

The château’s gallery across the River Cher became the only bridge allowing crossing into the free zone during the Second World War and the Menier family helped many people escape from the Nazi zone of occupation to freedom.

These days Chenonceau is still in private hands but you can visit all year round. Within the château, you can visit the Chapel with its magnificent stained glass windows, wander the gardens of Diane de Poitier and Catherine de Medici, and admire the bedrooms of these two immensely powerful women.

A romantic château must be haunted, and Chenonceau is no different! Stories are told of a glimpse of Catherine combing her hair by the light of the full moon, Diane gazing sadly into a mirror, and the White Queen, Louise, walking the gallery mourning her lost love.

Today’s Château de Chenonceau echoes with the stories of the six remarkable women who loved it and fought for it amid tales and stories of love, jealously, intrigue, hope, and hauntings.

The château is one of the very must-see visits of a trip to France. Another is the magnificent cathedral of Strasbourg. You can read about it here.

If you are seeing the castles of the Loire, it makes sense to stay locally. The Loire Valley is easy to drive around and hiring a car is simple. The roads and villages are quiet. It can get very hot in summer, so a hotel with air conditioning will allow you to sleep at night!

Below are four hotels that have a very high rating and are less than 1 kilometer from Château de Chenonceau. They range from charming hostels to famous hotels! 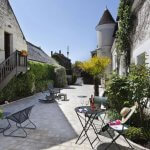 An 18th-century country inn in the center of Chenonceaux, just 500m from the Castle of Chenonceau and 31 km from Beauval Zoo. 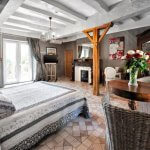 An 18th century building, just 400m from the Château de Chenonceau with an outdoor swimming pool and a restaurant and bar. 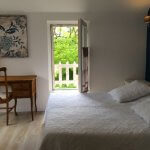 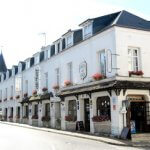 If you’ve enjoyed this travel guide to Castle Chenonceau, share the post now and pin it for later. I’d love to hear about your French adventures, so email me or leave me a comment below!